Few places in the world are as recognizable as the Taj Mahal. And few places are shrouded in as many mysteries, speculations, and legends either. Let’s take a journey down The Unknown Road and discover some interesting and little-known facts about the "Crown of Palaces"

1. A great yet tragic love story

Mughal emperor, Shah Jahan married Arjumand Banu Begum. She became his favorite wife and gave her the name Mumtaz Mahal (Persian meaning “the exalted one of the palace”). She had 14 children with Shah Jahn. In 1631, Mumtaz died after spending more than 30 hours in labor bearing their 14th child. She was 40 years old. In 1632 in a state of inconsolable grief, Shah Jahn commissioned the Taj Mahal in her honor. The Taj Mahal is presumed to be a symbol of Shah Jahn’s undying love and devotion for Mumtaz Mahal.

2. One of the New 7 Wonders of the World

The Taj Mahal is a modern marvel. Its design is perfectly symmetrical and it’s breath-taking. UNESCO designated this a world heritage site in 1983. In 2007, with more than 100 million votes from people around the world, the Taj Mahal was given the title of one of the New 7 Wonders of the World.

The mausoleum was constructed from Makrana marble from Rajasthan, India and was transported by an estimated 1,000 elephants to Agra, India.

The cost to build the Taj in the 1600s is estimated to have been 32 million rupees which would be equivalent to nearly one billion dollars today.

Well, not exactly. It just appears that way. When you first enter the main gate,

the monument appears incredibly large and majestic. The closer you get to the Taj, however, the smaller it appears ―exactly the opposite of what you would expect.

Besides the Taj appearing to shrink as you get closer, if you look close enough, you will find several more things that will trick your eye. Have a look at the decorative pinnacles (Guldastas) around the building. You will see the 2D Herringbone patterns in the stone inlay that make the column appear to be 6 sided and will look like they are turning.

The calligraphy surrounding the arched entryways gets bigger with height, giving the optical illusion to a viewer at the ground level they appear to be of the same size.

Depending on the time of day, the shimmering white marble may look yellow, pink, milky white, or even golden!

9. Taj Mahal has its own leaning towers

The four minarets surrounding the Taj Mahal aren’t standing straight up! Though they appear to be perfectly perpendicular to the ground, they are indeed tilted slightly away. This was done as a safety measure so that if any of them fell, they would fall away from the tomb rather than crash into the central structure.

10. The foundation is made of wood

You got it, wood. The foundations ultimately were the biggest technical challenge. How could they support the weight of a nearly completely marble structure? First, the riverbank was stabilized then wells were sunk and cased in timber and finally filled with rubble, iron, and mortar.

11. Twenty-Eight types of stones are used throughout

28 types of precious and semi-precious stones were inlaid into the white marble including jasper from Punjab, jade and crystal from China, turquoise from Tibet, lapis lazuli from Afghanistan, sapphire from Sri Lanka, and carnelian from Arabia. 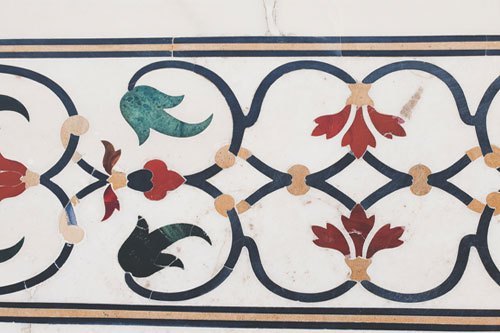 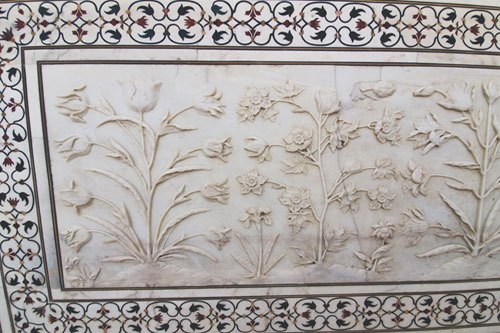 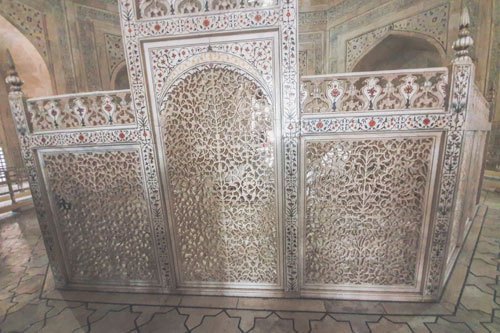 13. Pollution is its greatest enemy

Not only does the time of day affect the color of the marble, air-pollution does too. Air quality has been so bad, it was changing the gleaming white color of the marble yellow. There is so much pollution, in fact, back in 1998, India’s Supreme Court ordered a bunch of anti-pollution measures causing some nearby factories to close. Now there is a 4,000-square-mile environmental radius around the monument to help control emissions. Only electric vehicles are allowed near the structure and visitors must walk or take electric buses from the parking area to the Taj Mahal.

8 MILLION!! As many as 70,000 people per day wander through the majestic gardens and opulent interiors of the Taj Mahal. Due to growing safety concerns and conservation efforts, rumors are flying that the number of daily visitors may be capped to 40,000.

Myth: Shah Jahan supposedly severed the hands and gouged the eyes of the artisans to keep the beauty and magnificence of the Taj from ever being replicated. Thankfully, there is no historical evidence to support this.

16. There is a huge controversy in the love story

Over recent years, there have been many claims against the authenticity of this tragic love story. In fact, a man by the name of P. N. Oak has claimed there is proof the Taj Mahal was indeed built over a Hindu temple. In Oaks’ book Taj Mahal: The True Story, Oak says the Taj Mahal is not Queen Mumtaz’s tomb but an ancient Hindu temple palace of Lord Shiva (then known as Tejo Mahalaya ). After the publication of Oaks’ book, the basement rooms of the Taj Mahal were sealed by the ASI. Several lawsuits have surfaced, starting from 2000 with the most recent having been filed in 2017, demanding that the basement of the Taj Mahal be opened and all rooms be searched for the evidence of Taj Mahal’s Hindu origin.

We know you’re even more excited about venturing to India! Give us a call or send us an email. We’ll design your perfect getaway to wild India!

Why Kyoto Will Become Your Favorite City in Japan

Your Travel Bucket List – A Guide to Going Everywhere